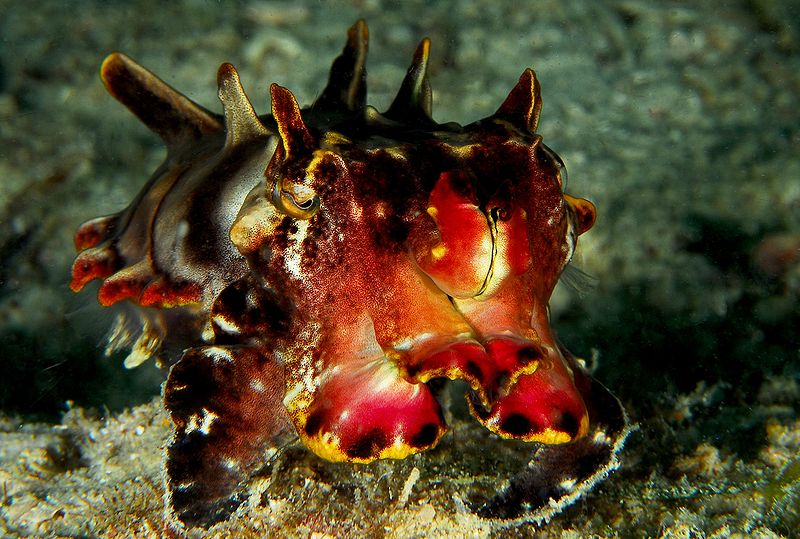 This flamboyant fish virtually communicates with a 'psychedelic color language'!

Watch one of the world’s most fascinating creature performing a stunning dance of immediate self-enfoldment, color and surface texture change.

Wave upon wave of bright yellow, white, brown and vermilion flashing neon-like on its burly body. Nature indeed performs its miracles in wondrous and mysterious way!

Cuttlefish, like squid, octopuses and nautiluses, are marine animals belonging to the Cephalopoda class. Studies indicate that cuttlefish are among the most intelligent invertebrate species. They hunt small shrimps in the daylight, changing its external appearance to that of a silt-covered stone before striking out.

The origin of the word cuttlefish can be found in the old English term cudele, derived from the Norwegian ‘koddi’ (testicle) and the Middle German ‘kudel’ (pouch), a literal description of the cephalopod’s shape. The Greco-Roman word ‘sepia’ described the cephalopod as a source of the unique brown pigment released from its siphon when alarmed.

Late psychedelic researcher and ethnobotanist Terence McKenna had this to say about the amazing color-change ability of the cuttlefish:

I believe that the totemic image for the future is the octopus. This is because the squids and octopi have perfected a form of communication that is both psychedelic and telepathic; a model for the human communications of the future.

In the not-too-distant future men and women may shed the monkey body to become virtual octopi swimming in a silicon sea.

Culture replaces authentic feeling with words. As an example of this, imagine an infant lying in its cradle, and the window is open, and into the room comes something, marvelous, mysterious, glittering, shedding light of many colors, movement, sound, a tranformative hierophany of integrated perception and the child is enthralled and then the mother comes into the room and she says to the child, “that’s a bird, baby, that’s a bird,” instantly the complex wave of the angel peacock irridescent transformative mystery is collapsed, into the word.

All mystery is gone, the child learns ‘this is a bird’, and by the time we’re five or six years old all the mystery of reality has been carefully tiled over with words. “This is a bird, this is a house, this is the sky”, and we seal ourselves in within a linguistic shell of disempowered perception, and what the psychedelics do is they burst apart this cultural envelope of confinement and return us really to the legacy and birthright of the organism.

What if language were visible?
If we could see language, if language were a project of understanding that used the eyes for the extraction of meaning rather than the ears, it would be a kind of telepathy. There would be both a fusion of the observer with the object observed, and with the person communicated with. The place in nature where something like this has actually evolved is in the cephalopods.

These octopii have chromataphores all over the exterior of their bodies. Chromataphores are cells that can change color. Now many people know that octopii can change color but they think its for camouflage, for blending in with the environment, this is not at all the case. The reason octopii change colors in a very large repertoire of stripes, dots, blushes, travelling shades and tonal shifts is because this is for them a channel of linguistic communication.

What this boils down to is they physically become their meaning.
They can also, because they’re soft-bodied, fold and unfold and reveal and conceal, very rapidly, different parts of their body. So they’re capable of a visual dance of communication.

How can an octopus have a ‘private thought’?
In fact the only way an octopus can experience a private thought is to release a cloud of ink into the water into which it can retreat briefly and hide its mental nakedness from its followers. This kind of biologically intrinsic wiring into the potential of language is something that we may be able to mimic and achieve using psychedelic drugs as the inspiration for the direction given to a virtual reality development program. In other words we might be able to create kinds of visibly beheld syntax that would be the human equivalent of the dance of light, texture and positioning that constitutes the grammer and syntax of squids and octopii. 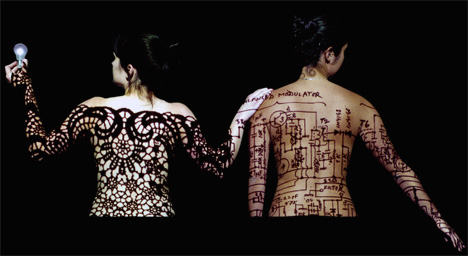 Could a ‘Second Skin’ applying visible language be useful for humanity in the future?

Imagine a ‘visual live lie detector’, an artificial skin which instantly reflects our mood, thoughts and feelings – a Second Skin.
Your body will be painted with a specially formulated ink via brush, spray or stamp. The paint acts, similar to a computer screen, as a medium to send information from a person to another (or even to transmit data via gestures and touch directly from a person to a computer). Many different areas of application of such an ‘augmented skin’ can be proposed, for example:

Dating
Is honesty the best policy in the world of dating? Does honesty harm or improve the dating scene?  Second Skin technology would certainly reveal what’s really going on between the genders. For example blushing, which reveals shame or insecurity, would be impossible to hide. However, a great advantage would be that disguising becomes literally impossible. Imagine a woman sitting in a café. She finds the guy sitting close to her very attractive – immediately her Second Skin turns red, indicating her attraction. The darker the red, the more interest she discloses…

Psychotherapy
Another area of application can be anticipated in psychotherapy. Patients would not be able to deceive themselves and fool the therapist anymore – their second skin would give tell-tale signals to the therapist immediately. On the other hand, evaluating the integrity of the therapist will also be much easier; putting the psychologist’s candidness to the test by asking about various personal values and moral issues will be a thing of the past. Therefore successful therapy results will be reached much faster.

3D Cyberworlds
Finally, avatars in virtual cyberworlds could be connected to the real bodies of the users. Their emotions would instantly change the color and demeanour of their virtual representations. Imagine not only navigating your avatar in 3D worlds with your thoughts, but also changing its colors just with your emotions! This would lead to a much more realistic and emotionally touching experience in cyberspace – and through the instant feedback loop it could certainly have an interesting effect on real life.
(See also: Mind and brainwave controlled devices.)

This flamboyant fish virtually communicates with a 'psychedelic color language'! 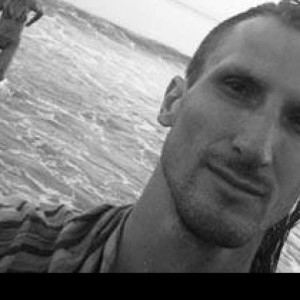